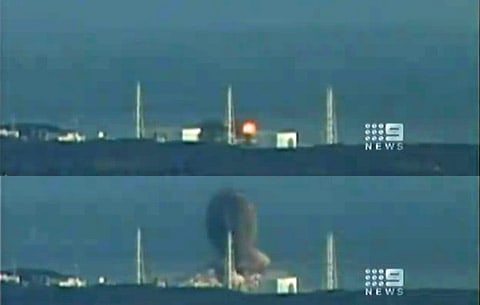 A second explosion has occurred at the Fukushima Nuclear Power Plant in Japan.

Chief Cabinet Secretary Yukio Edano gave assurances that the No. 3 reactor's containment vessel survived the explosion, just like the one at the No. 1 reactor, which blew up its housing on Saturday.

Tokyo Electric Power Co., struggling to cool down all three reactors, said the water level in the No. 2 reactor is still above the fuel rods, but officials are scrambling to prevent a meltdown.

The latest hydrogen explosion came as the government — confronted by the massive rescue and body retrieval operation all along the Tohoku region coast, and the threat of massive power outages in the Kanto region — scrambled to prevent a nuclear meltdown that could be triggered by overheating fuel rods.

NYT: "As the scale of Japan’s nuclear crisis begins to come to light, experts in Japan and the United States say the country is now facing a cascade of accumulating problems that suggest that radioactive releases of steam from the crippled plants could go on for weeks or even months."

Watch the explosion, AFTER THE JUMP…