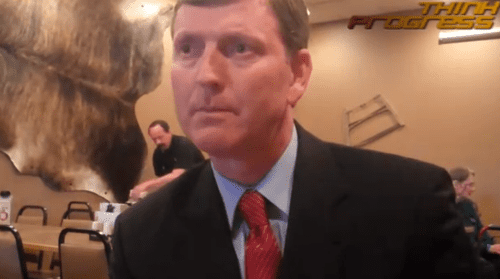 In an interview with Scott Keyes of Think Progress, Chuck Norris-endorsed wingnut Republican Bob Vander Plaats says that he believes homosexuality "is a public health risk." The head of the anti-gay organization Iowa Family Leader, which is spearheading the anti-marriage equality movement in that state, backs up his statement with some of the most preposterous spin I've heard in a long time:

"When you take a look at it, this isn’t the Family Leader, but say the New York Health Department. They’ve put out an ad basically highlighting all the dangers of the homosexual lifestyle, that you’re this many times more to get this particular disease or this many times more to get this other type of disease. Now, they conclude with 'practice safe sex.' But they’re almost taking our talking points. Because anybody, the Journal of Medicine will back us up on this, that this is a risky lifestyle, health risk lifestyle. If we’re teaching the kids, 'don’t smoke, because that’s a risky health style,' the same can be true of the homosexual lifestyle. That’s why I think we need to speak the truth once in a while."

Someone needs to tell Vander Plaats that a true "risky health style" is hate and ignorance. Watch the short clip, AFTER THE JUMP.