Former NBA player John Amaechi, who came out in 2007 after he retired, talks to USA Today about Kobe Bryant's recent slur, as well as his follow-up statement: 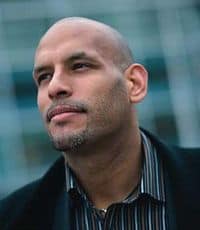 I suppose that's the typical, "I apologize if you're offended" type of comment. I doubt very much when he said that that he thought Bennie was a pile of sticks. There's only one contemporary meaning for that.

The problem we have now is because of the way we don't address homophobia, the ultimate insult to a man is to tell them either they're like a woman or worse, that they're gay.

We have to take it as unacceptable as a white person screaming the N-word at a black person. … I can tell you that I've been called a f——- fairly routinely, and yet people seem to hold off on calling me the N-word. We've got to mirror that progress.

Amaechi said that while he agrees with the fine imposed (which Kobe is appealing), what he'd really like to see Kobe do is make a difference:

I'm not interested in seeing Kobe punished. What I'm interested in is if you're really sorry, that this is a one-off mistake for you, use the power you have to make a difference. That means a proper apology and doing something with his brand. Good Lord, he's got the power with one executive decision to get people moving and do something good here. Do something good.

I've said this before and I know people think it's hyperbole, but especially in America, people look at sports stars like their gods. I keep saying every time, "If sports stars are gods it's time we see a miracle every once in a while." This is an opportunity for that.

…what I would want is to encourage Kobe to use the power he has to really make an apology that means something. Tell black men, men in general in America, that resorting to that sort of language is the lowest of the low and is unacceptable. And it doesn't make you any more of a man. That's really the answer. Saying you didn't mean it is not the answer.

Much more interview at USA Today…