An attack on a student and his friend on the campus of Swarthmore College on Sunday has elements of an anti-gay hate crime, according to the Delco Times: 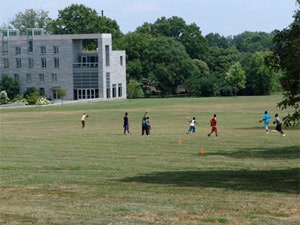 H. Elizabeth Braun, dean of students, wrote a letter Tuesday to the college community saying both victims are OK after being treated for their injuries, both on campus and later at the hospital.

“I am writing both out of concern for the victims and campus safety and because I have been made aware of some additional facts and corrections since the initial (public safety) alert went out that I want to share with you,” she stated.

“Our student has also shared that he and his friend were being affectionate with one another when they were approached by the high school-aged students. While it still isn’t clear what prompted the assault on our student and his friend, it does appear that homophobia could have been a factor in the attack,” Braun wrote. “I know that you share my distress and concern that any type of physical assault would take place on our campus, particularly one that may have been motivated by hate. I know that you will join me in condemning this act of violence on our campus and I appreciate that many of you have already expressed your concern to me.”

The police and campus security are investigating, though police say the first they heard of "homophobia" was the following morning.

“There was no mention of homophobia,” Craig said, adding that such an attack “would be out of character for this community.”

According to Craig, police suspected the Swarthmore College student and his friend, visiting from the University of Pennsylvania, probably angered a group of high school-aged youth who had asked them for booze.

Because violent booze-thirsty kids and homophobia never go together.

Previous Post: « Watch: Britney Spears’ Ultra-Literal Video for ‘Till the World Ends’
Next Post: No Supporters Show for ‘Domestic Relations’ Bill That Would Make Gays ‘Somewhat Equal’ in Rhode Island »