Kevin Sessums speaks to Kathleen Turner about her role as  Sister Jamison Connelly, a recovering alcoholic, in Matthew Lombardo's High, on Broadway. Sessums describes Jamison's role as "a substance abuse counselor at a Catholic charity where a priest insists she increase her case load by one extra patient for whom he has a personal interest: a gay meth-slamming teenage hustler, portrayed with a haunting verisimilitude by Evan Jonigkeit." 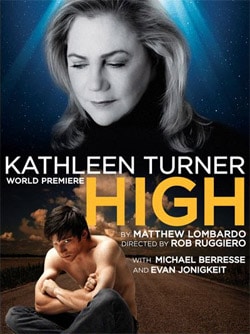 In the interview, Sessums and Turner touch on the destructive world of meth addiction:

SESSUMS: I think the producers of this play should take out ads for High on the gay Internet sex sites where meth use can so easily be found. The combo of meth and sex, however, is referred to as "party and play" on those sites as a kind of online lingua franca, as if reducing drug use to something that is childlike—something akin to ring-around-the-rosy—will make it more innocent. I won't be a hypocrite. I have participated at times in such "play" and it is as far from innocence as I have ever wandered.

TURNER: We had what they call "talk-backs" after some of the performances before we got to Broadway and we plan to do some of that here also. Hundreds would stay when we had them before. Ed Stern, who is the Artistic Director of the Cincinnati Playhouse, finally said he couldn't handle it anymore. It was too much like being in a confessional. All these stories of addiction were told as lives completely destroyed. I came to the conclusion that I have been really naive. This methamphetamine is the most urgent thing I've ever heard of. And I am told it is the needle that is the death knell if one is not careful. I will figure out how to pass on carefully the suggestion you've made of advertising on these sex sites.

Also touched on in the interview — Turner's past stage and movie roles, being a sex symbol, alcoholism, and life as a diva.