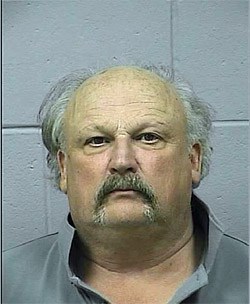 Three Bangor police officers were called to the Hogan Road restaurant at 9:45 p.m. to deal with Kevin Schmersal, 58, (pictured) who got into a fight with a group of five men and one woman —  at least one of whom was from San Fransisco (sic) — at the restaurant’s bar, the sergeant said. The California city is known for its gay community.

After finding out the victim was from San Francisco, “Mr. Schmersal then allegedly made a derogatory remark about his sexuality based on his hometown,” Edwards said in a statement.

“He thought it was his right to say whatever he wanted,” the police sergeant added Wednesday, saying he was barred from releasing exactly what Schmersal called the visiting man.

The California man’s son became upset by Schmersal’s remarks and he and others in the group began fighting with Schmersal.

“There were actually punches thrown, but no one got hit,” Edwards said.

They should send him on a trip to The Eagle before it closes. He'd probably change his mind.