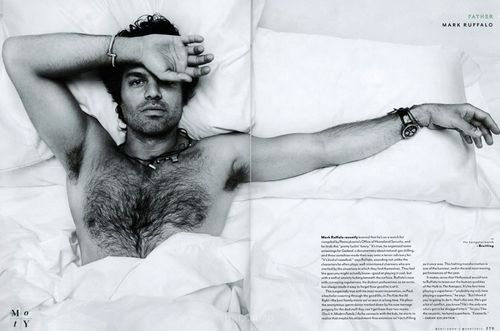 LGBT rights ally Mark Ruffalo gives an interview to Brandon Voss at The Advocate in which he expresses hope that he'll hold on to his body hair for his upcoming film role as the Hulk in The Avengers.

"No one’s asked me to shave my chest yet, thank God. They want this Hulk to be as close to me as possible. I’ll be playing him in motion-capture, so this Hulk will just be a bigger avatar version of me. As they’re modeling him, they’re using many of my own features, down to my scars and wrinkles. He will have body hair, but I don’t know to what extent."

When asked if he knows his chest hair is famous in certain gay circles, Ruffalo responds:

"I was not aware. But that’s good, because young girls are probably like, 'Ew, chest hair! I didn’t even know guys grew hair there.'"

The interview also reveals that Ruffalo is as hot on the inside as he is on the outside. He discusses his passion for equality and gay rights activism and tells a story about his first exposure to a gay person:

During my senior year of high school, a really close friend of mine came out to me. He was so depressed, he was suicidal for weeks. I kept asking, “What’s wrong with you?” He’d cry, but he wouldn’t tell me. I didn’t know what a problem so big could be, so I thought he killed somebody. Finally, I got him to tell me, and that was the first time I knew a gay person. I’d heard about gay people, but I had no idea what that was. At the time I was in Virginia Beach, where homosexuals were like an urban myth. All of a sudden, there it was in front of me, and it was a person that I really admired. He asked, “Are you not going to be my friend anymore?” I said, “Of course not.” You come to a moral question at that moment: Is this person I’ve known all this time now a dreaded, horrible human being that’s to be shunned, or is this person just like everybody else, except for a different sexual orientation? Luckily, I’d had whatever it takes to make someone see a person for who they really are — and to stand up and accept that even when other people around you don’t.