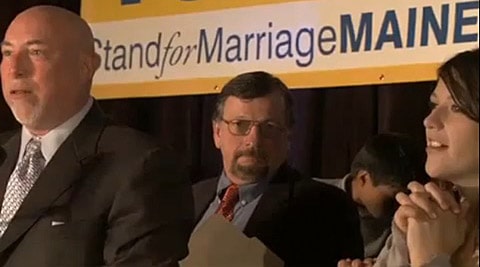 Question 1 is a new documentary shot during Maine's successful "Yes on 1" campaign to overturn the state's marriage equality law, utilizing interviews with players on both sides.

The Portland Press Herald rightly reports that the take-away in this documentary, which was filmed during the campaign on the condition that it not be screened before the election, is the regret expressed by the leader of the anti-gay initiative.

Says Marc Mutty, public affairs director for the Roman Catholic Diocese of Maine, and chair of the "Yes on 1" campaign in the film's trailer:

Watch it and weep, AFTER THE JUMP…

"One of the problems that I have: I know what we need to do and what we need to do is slam people over the head, not only with a two-by-four, but a two-by-four with nails sticking out of it. … Unfortunately, I think it's a lousy approach, but it's the only thing we've got and it's the only way. That's the way campaigns work. And we use a lot of hyberbole, and I think that's always dangerous. You know, we say things like 'Teachers will be forced to (teach same-sex marriage)!' Well, that's not a completely accurate statement and we all know it isn't, you know? … Let's look back at our ads and see what we say. And I think we use hyperbole to a point where, you know, it's like 'Gee-ee-eez!'"