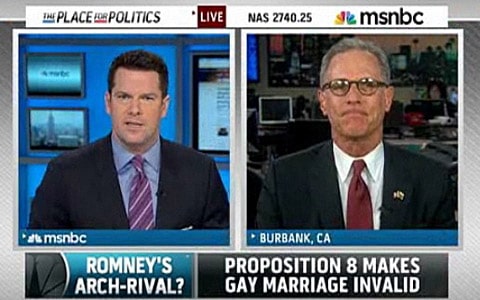 Karger also notes that he has written an article in the UK Guardian today going after Mike Huckabee. You can read it here, but here's a bit of it:

"One year ago, Mike Huckabee said terrible things about my community and me. He compared gay marriage to incest, polygamy and drug abuse. He said that gay couples should not be able to adopt: 'These are not puppies, raising children is not an experiment.' Who the hell is he to cast aspersions on others? I don't like self-righteous bullies. So, I will from time to time bring up the hypocrisy of those others who are considering running for president in 2012. I have written three previous columns asking Mike Huckabee to apologise to the victims of these horrific murders and to the millions of gay, lesbian, bisexual, transgender and queer Americans whom he brands as unfit parents. He certainly owes us an apology, as well."

Watch Karger talk to Thomas Roberts, AFTER THE JUMP…