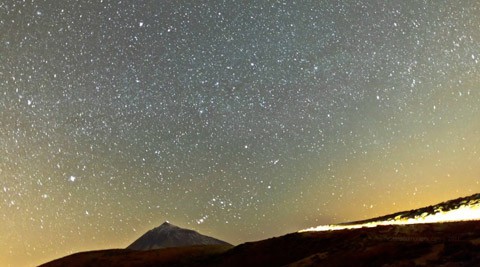 A couple weeks ago I posted a stunning time-lapse of the Aurora Borealis shot by Terje Sorgjerd. Here's his latest, from Tenerife in the Canary Islands (which is a good distance from Spain proper). He writes:

This was filmed between 4th and 11th April 2011. I had the pleasure of visiting El Teide.
Spain´s highest mountain @(3718m) is one of the best places in the world to photograph the stars and is also the location of Teide Observatories, considered to be one of the world´s best observatories.

The goal was to capture the beautiful Milky Way galaxy along with one of the most amazing mountains I know El Teide. I have to say this was one of the most exhausting trips I have done. There was a lot of hiking at high altitudes and probably less than 10 hours of sleep in total for the whole week. Having been here 10-11 times before I had a long list of must-see locations I wanted to capture for this movie, but I am still not 100% used to carrying around so much gear required for time-lapse movies.

Also, Sorgjerd notes that the golden effect at 0:32 is caused by a sandstorm that blew in from the Sahara.

Watch, especially if you are looking for a bit of peace in your day, AFTER THE JUMP…