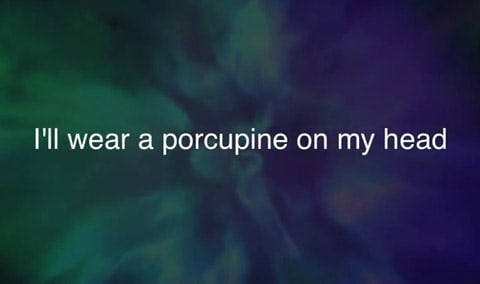 "Weird Al" Yankovic is taking public a denial by Lady Gaga to allow him to put a parody recording of "Born This Way" on his forthcoming album.

He says that he asked Gaga's management for permission, and tells the story in a blog post:

A couple days later we got the final word: Lady Gaga says “no.”

And that’s it. As of this posting, I still don’t know specifically what kind of problem she has with the song (obviously I take a few jabs at her, but y’know, it’s satire – that’s how it’s supposed to work). And I’m especially confused as to why she waited until I actually recorded the song (at her insistence!) before saying no. It’s not like there were any surprises in the finished song that she couldn’t have foreseen by, you know, READING THE LYRICS.

A conventional release for the song and video would have also raised a nice chunk of change for the HRC – an organization which I have to assume Gaga supports. Hopefully, if fans enjoy hearing the song online, they’ll make a donation anyway.

So, "Weird Al" has posted it on YouTube, and it's amusing in the way "Weird Al" is amusing, which is to say it's satire, and not anything that folks haven't mocked about her before.

…sources extremely close to the singer tell us, "There must have been a misunderstanding because [Gaga] is in no way trying to block the release of the parody."

According to sources, "She's busy touring and hasn't heard the song yet. Her manager hasn't had a chance to play it for her yet" — adding, "She's a huge Weird Al fan."

Apparently the fact that she didn’t approve it was news to Lady Gaga herself!

Gaga’s manager has now admitted that he never forwarded my parody to Gaga – she had no idea at all. Even though we assumed that Gaga herself was the one making the decision (because, well, that’s what we were TOLD), he apparently made the decision completely on his own.

And Gaga loves the song.

I’m thrilled on many levels to hear this, because 1) I truly respect and admire Gaga as an artist and it pained me to think of her as having less than a great sense of humor, and 2) it means I GET TO PUT OUT MY ALBUM!

Previous Post: « Watch: Raw Milk Pants
Next Post: Trailblazer: Chad Allen Records Video About Coming Out, Urges Other Actors to Do So »