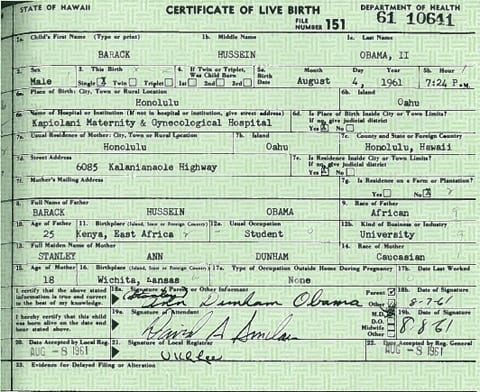 President Obama today released his long-form birth certificate, the document so-called "birthers" have been demanding to see from the beginning of his presidency.

When any citizen born in Hawaii requests their birth certificate, they receive exactly what the President received. In fact, the document posted on the campaign website is what Hawaiians use to get a driver’s license from the state and the document recognized by the Federal Government and the courts for all legal purposes. That’s because it is the birth certificate. This is not and should not be an open question.

The President believed the distraction over his birth certificate wasn’t good for the country. It may have been good politics and good TV, but it was bad for the American people and distracting from the many challenges we face as a country. Therefore, the President directed his counsel to review the legal authority for seeking access to the long form certificate and to request on that basis that the Hawaii State Department of Health make an exception to release a copy of his long form birth certificate. They granted that exception in part because of the tremendous volume of requests they had been getting. President Barack Obama's long form birth certificate can be seen here (PDF).  Correspondence with the Hawaii State Department of Health can be seen here (PDF).

Obama is scheduled to address the media at 9:45 am ET.