Former President George W. Bush has declined an invitation from President Obama to join him as he visits Ground Zero tomorrow, the White House confirmed: 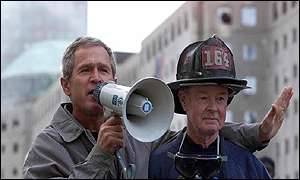 “President Bush will not be in attendance on Thursday,” said his spokesman, David Sherzer. “He appreciated the invite, but has chosen in his post-presidency to remain largely out of the spotlight. He continues to celebrate with Americans this important victory in the war on terror.”

The White House did not confirm that the invitation had been made or comment on Mr. Bush’s decision.

Mr. Obama has talked this week of his hope that the successful raid on the compound where Bin Laden was hiding could serve as a unifying force in a country divided by battles over fiscal policy and many other issues.

The visit might have served as a bookend to this visit, three days after the attacks on the WTC.