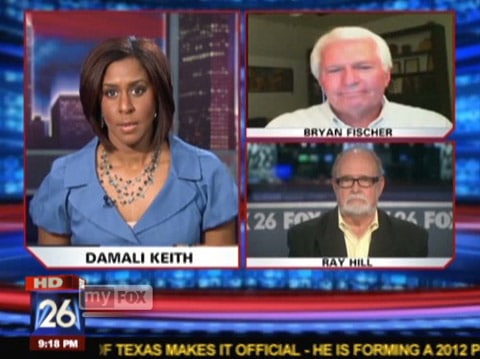 Last week I posted a clip of a segment from a Houston FOX affiliate on Glee in which anchor Damali Keith suggested that gay couples on the show were "product placement", and Bryan Fischer, from the SPLC-designated hate group American Family Association, warned audiences at home that homosexuality is a "risky lifestyle" and portrayed gay men as AIDS-carrying health risks.

Watch the segment again, AFTER THE JUMP…

GLAAD has called on the affiliate to apologize, which they said they would do, but then backtracked on that promise. Meanwhile, hate group leader Fischer has lashed out at GLAAD.

After receiving complaints about this FOX Houston program, GLAAD contacted the station to demand that they issue an apology. Broadcasting anti-gay speech is dangerously irresponsible, and the station must be accountable. In conversations with GLAAD, a representative of the station implied that an apology was in order and should be expected. However, no apology has been issued, and in an abrupt reversal, representatives of the station now maintain that they stand behind this content.

Fear of the truth is why GLAAD has launched virtually a nationwide campaign to deprive me of my right to freedom of religion, freedom of speech, and freedom of the press. They don’t want my message on the air. They want the message screened out, censored, and banished. And so as always, the very folks who claim they are the paragons of tolerance prove to be the most intolerant folks of all.

In so doing, they have revealed that they detest the First Amendment and the protection it provides for robust public discourse on important social issues.

Why such tyrannical and vitriolic repression? Simple: gay activists can’t handle the truth.

And GLAAD's Jarrett Barrios responds to Fischer in a statement obtained by Towleroad:

“It’s many anti-gay activists who can’t handle the truth that more and more Americans are supporting their LGBT friends, family, neighbors and co-workers. The first amendment doesn't protect from being criticized for bad journalism nor does it guarantee a platform for representing inaccurate and extremist views in the media.”

You can sing GLAAD's petition to get the station to apologize here.

Is TV Too Gay?: MyFoxHOUSTON.com