This is in addition to the disruptive amendments I posted about earliery.

Even though respect for religious beliefs is already protected in current "DADT" repeal language, Rep. Steven Palazzo (R-MS) is proposing an amendment that would protect service members who view gay people as immoral, The Wonk Room's Igor Volsky reports. 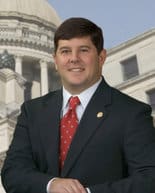 The sincerely held religious or moral beliefs of a member of the Armed Forces that homosexual or bisexual conduct is immoral and/or an inappropriate expression of human sexuality according to the tenets of the member’s faith community shall be accommodated….

The Secretary of Defense shall issue regulations setting forth guidance to insure that the sincerely held religious or moral beliefs of members of the Armed Forces regarding homosexual or bisexual conduct are protected, accommodated…

The House Armed Services Committee is set to meet tomorrow.