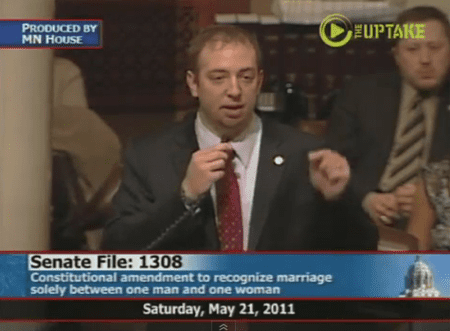 There were many emotional speeches from various members of the Minnesotan House of Representatives during last night's debate on the state's same-sex marriage amendment.

John Kriesel, a Republican and Iraqi war vet who lost the use of both of his legs, gave one of the night's most moving speeches against voting for the measure. Said Kriesel amid chants of protesters in the rotunda of the Capitol outside of the chamber: "This amendment doesn't represent what I went to fight for. This doesn't represent that. Hear that out there? That's the America I fought for, and I'm proud of that."

As you know, members of the House subsequently voted on the issue and it will now go to voters in 2012. Kriesel was only one of four republicans to vote against the measure.

Watch him address his colleagues and also watch the aftermath of the vote from inside the Capitol, AFTER THE JUMP.