Timothy Dolan, the Roman Catholic archbishop of New York, is still spouting his homophobic rhetoric. In a new blog post, he defends himself from accusations of bigotry by insisting that the Catholic Church is "not anti anybody; we are pro-marriage." That's not the first time he's used that excuse. 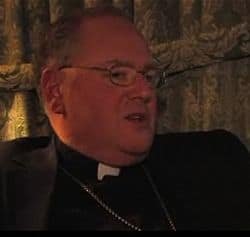 "To tamper with that definition, or to engage in some Orwellian social engineering about the nature and purpose of marriage, is perilous to all of us.  If the definition of marriage is continually being altered, could it not in the future be morphed again to include multiple spouses or even family members?"

"If big, intrusive government can re-define the most basic, accepted, revealed truth that marriage simply means one man + one woman + (hopefully) children, in a loving family, then, I’m afraid, Orwell’s works will no longer be on the fiction shelf.  As someone commented to me the other day, 'Wouldn’t it be better for our government to work on fixing schools than on redefining marriage?'"

In March, Dolan told 60 Minutes that same-sex marriage is equivalent to marrying one's own mother.