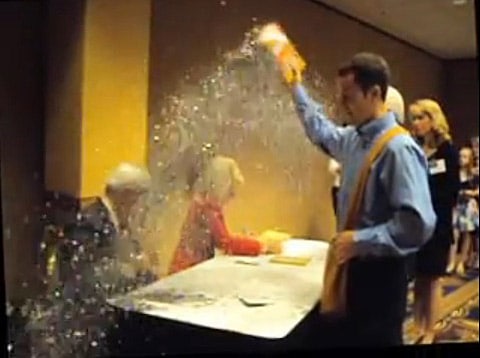 At a book-signing last night, a gay activist poured a bucket of glitter over Newt Gingrich and his wife as they sat at a table at a Minnesota Family Council event, ABC News reports: 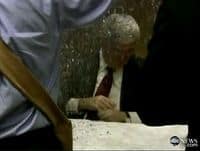 The glitter culprit is Nick Espinosa, a 24 year old unemployed non profit worker turned social activist from Minneapolis, Minn.  Espinosa worked with a non-profit helping unemployed people for two years before being laid off due to budget cuts.  His encounter with Newt on Tuesday was in protest to Gingrich’s stance on gay marriage.

“Today, I invited Newt to feel the rainbow because he decided to bring his anti-gay politics to my state,” Espinosa told ABC News Tuesday night.  “Newt has a long history of anti-gay politics and has chosen to focus on divisive social issues instead of working to fix our economy.  I don’t think a free will adulterer like Newt has any ground to stand up while telling others who they can and can’t love.”

Said Espinosa during the glitter bomb: "Feel the rainbow Newt. Stop the hate. Stop the anti-gay politics. It's dividing our country and it's not fixing the economy."

Said Newt after the attack. "Nice to live in a free country."

As Espinosa was kicked out, Newt's flunkey said: "So goes you, goes the rotting of our country. Have you ever seen us attend one of your events? Have we disturbed your events? Never. Peace be with you."