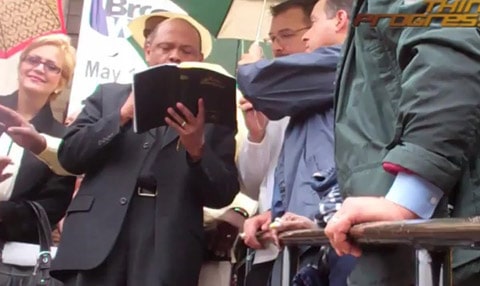 The Wonk Room's Igor Volsky has posted video of a pastor at Sunday's hate march in the Bronx, hosted by New York Senator Ruben Diaz and the National Organization for Marriage, calling for death to gay people.

In fact, just minutes before Diaz took to the microphone to stress his respect for gay people, Rev. Ariel Torres Ortega of Radio Visión Cristiana said that the gay people are “worthy of death”:

Committing sexual acts between man and man. And receiving the retribution of the things that they have done from straying away. And because they did not take God in count. God gave them over to reprimand their mind to do things that are not right, being against all justice, fornication, perversity, aberrations, malignity…those who practice such things are worthy to death, not only do they do it, but those who also practice it. God bless this earth. That is the word of God.