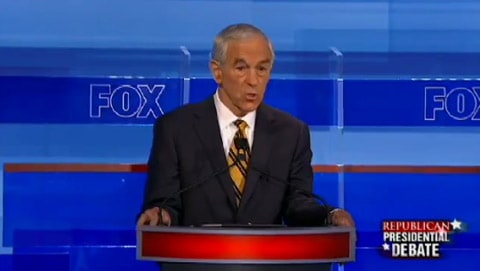 Ron Paul addressed same-sex marriage and DOMA at last night's GOP Presidential Debate, as well as the legalization of heroin and his definition of liberty.

Check out the clips along with some commentary from around the web, AFTER THE JUMP…

A new CNN poll, taken before the Bin Laden news, showed Ron Paul as the only current GOP presidential hopeful with a chance of beating Obama in November:

According to the poll, taken before the announcement of Osama bin Laden's death, President Barack Obama has an edge over all the top GOP candidates in hypothetical match-ups.

Who does best against Obama? Paul. The congressman from Texas, who also ran as a libertarian candidate for president in 1988 and who is well liked by many in the tea party movement, trails the president by only seven points (52 to 45 percent) in a hypothetical general election showdown. Huckabee trails by eight points, with Romney down 11 points to Obama. The poll indicates the president leading Gingrich by 17 points, Palin by 19, and Trump by 22 points.

Jeremy Hooper at Good As You writes:

Congressman Paul's description is completely lacking on the practical level. In truth, DOMA not only involves "protecting the states," as it were, but also involves limiting those states that do have equal marriage rights from honoring their married same-sex couples in the same way as heterosexual marriages. So while it may be consistent with his larger goal to see benefit in DOMA section 2 (the part that prevents states from having to honor other states' unions), Congressman Paul's lack of acknowledgement for DOMA section 3 (the part that prevents states that currently have equal marriage from receiving the same federal recognition that heterosexual couples currently receive) gets back to his unwillingness to focus on the here and now and instead focus on the theoretical future. In the here and now, there is inequality under the law. A member of Congress (and certainly a president) has to deal with the present bull crap, even if he thinks the odor runs deeper.

And here's a question about the legalization of drugs and liberty:

As Ron Paul starts in on his heroin lecture he's basically being laughed off the South Carolina stage. Then, in just two minutes and thirty seconds, he manages to gently point out the GIANT contradiction in a bunch of small-government, freedom-first conservatives cheering for government to interfere in people's private lives.

Now, the presence of this kind of contradiction isn't news or a revelation to anyone who pays attention to politics. But it's not easy to explain the contradiction to a crowd like this, to basically tell a bunch of South Carolina conservatives that they're being unthinkingly inconsistent. Ron Paul does that, and at the end of his two minutes and thirty seconds he essentially has a hall full of Republicans cheering for heroin legalization.