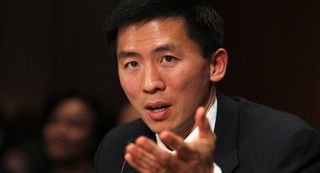 In a striking, but entirely expected, example of the intellectual dishonesty and inconsistency of most Republicans in the Senate, the upper house today failed to invoke cloture on the nomination of UC Berkeley Law Professor Goodwin Liu to the Court of Appeals for the Ninth Circuit. With 42 votes, Senate Republicans — all of them, since it was the newly-independent senator from Alaska, Liza Murkowski, who was the lone member of the Republican caucus to vote with her Democratic colleagues to end debate — blocked an "up-or-down" vote on a brilliant man who even conservatives think would be a great addition to the circuit court.

Republicans gave various reasons for their "no" votes. Professor Liu is "too liberal," "too radical," "out of the mainstream," "he believes in a wholesale rewriting of our values," "he's crazy," and so on. Former George W. Bush Administration lawyer Richard Painter addressed these baseless myths of Professor Liu's liberalism in an extensive article published at the Huffington Post. His arguments are so succinct, so thorough and so correct that I will not repeat them here.

Conservatives were particularly enraged by Professor Liu's supposed views on marriage equality. We should be used to the phenomenon of conservatives arguing that the recognition of gay persons' basic equality is somehow "radical," but, to be honest, I'm not even sure Professor Liu has a view on what the Constitution says about marriage equality. In 2007, Professor Liu joined an amicus brief by 17 law professors arguing that California laws against same-sex marriage violates the California Constitution. The anti-gay conservative writer Ed Whelan over at the National Review Online who famously compared Justice Elena Kagan to a prostitute, thinks Professor Liu's presence on this amicus brief is enough to conclude that Liu supports the "invention of a federal constitutional right to same-sex marriage." But, the California Constitution is different than our nation's highest law. Neither the amicus brief nor any public comments and writings even touch on what Professor Liu thinks the federal Constitution says about marriage equality. He's simply never addressed it. And, in fact, he has even argued that the California Supreme Court was right to uphold Proposition 8 when it did, a position that won Professor Liu no liberal bona fides. This should show Senate Republicans that Professor Liu is willing to recognize what the law is rather than what he would like it to be.

But it was the always honest Senator Lindsey Graham (R-SC) whose impolitic and refreshing candor zeroed in on the pettiness of Senate Republicans (himself included): "His outrageous attack on Judge Alito convinced me that Goodwin Liu is an ideologue," Sen. Graham said before today’s vote. "His statement showed he has nothing but disdain for those who disagree with him. Goodwin Liu should run for elected office, not serve as a judge."

Professor Liu testified against the nomination of then-Judge Samuel Alito to the Supreme Court, calling the conservative jurist an "ideologue" and "unduly harsh" in his decisions. He said that "Judge Alito's record envisions an America where police may shoot and kill an unarmed boy to stop him from running away with a stolen purse … where a black man may be sentenced to death by an all-white jury for killing a white man." During his own confirmation hearings, Professor Liu backtracked, calling his remarks "overly flowery," "unhelpful" in an already polarized process and evidence of his own "poor judgment" at the time.

First, if you want to be a judge, you cannot have any opinions about other people's views, and if you do, state your disagreements with the muted tones of a man who doesn't like his wife's new haircut. Second, when you do air your academic debates and find yourself to the left of some of your colleagues, Senate Republicans are willing to throw you under the bus and ignore their Gang of 14 commitments. The Gang of 14 was a group of senators who pledged to support judicial nominees absent extraordinary circumstances and regardless of party. It is hard to see how Professor Liu was anything other than extraordinarily qualified except for when he ticked off a few petty Republicans who did not like his characterization of a right-wing judge from New Jersey.

This episode also shows that judicial fights are getting worse. Up to now, many of us had thought that Borking a nominee — blocking the nomination of a judge you disagreed with — was all about politics, your own views and your substantive disagreements with the views of the nominee. That's bad enough, considering that what we want in our judges are the best and brightest regardless of party. Now we see that, at least when it comes to Senate Republicans, judicial confirmation votes will resemble the petty and childish rules of the schoolyard.