Kevin Jennings, head of the Office of Safe and Drug-Free Schools in the Education Department, is leaving in the summer to be the the new president and CEO of Be the Change, MetroWeekly reports: 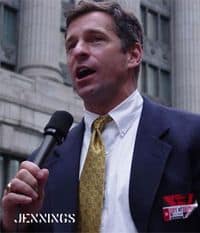 In a news release from Be the Change, Jennings said of his new role, "It has been an honor to serve in the Obama Administration and specifically on Secretary [Arne] Duncan's leadership team at the Department of Education. I am incredibly excited to return to the nonprofit sector by joining the Be the Change team and working on issues like promoting public service and increasing economic opportunity, the kinds of critical challenges we must solve if America is to continue to thrive in the 21st century."

Be the Change was founded in 2007 by current president and CEO Alan Khazei, the co-founder of City Year. Jennings will be the second leader for the organization, a move praised by Be the Change board chair Josh Bekenstein of Bain Capital.

You may recall that Kevin Jennings was the subject of a "witch hunt" by conservatives and GOP upset that an openly gay man who founded the nation's largest anti-bullying organization (GLSEN) had been appointed to a White House post.