The U.S. House yesterday adopted  the fiscal year 2012 defense authorization bill by a 322-96 along with several anti-gay provisions intended to affect implementation of repeal of the military's gay ban and prevent same-sex marriages from taking place within military facilities and by military chaplains. 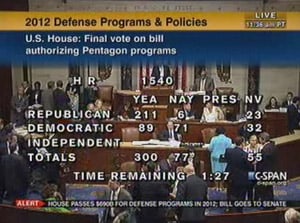 Read about the amendments, which advocates do not expect to succeed in the net-yet-introduced Senate version of the bill, here.

Informed sources said House Democratic leaders offered those who worked last year to repeal “Don’t Ask, Don’t Tell” repeal the opportunity for an amendment on the floor to eliminate the language in the defense authorization bill related to certification expansion.

However, the five major repeal organizations — the Human Rights Campaign, Servicemembers Legal Defense Network, Third Way, Servicemembers United and the Center for American Progress — agreed to decline the opportunity for the amendment.

According to sources, repeal advocates believed such a amendment would likely fail and could pick up support from moderate House Democrats. A defeat on the House floor, advocates believed, would increase the chances of the Senate adopting the certification expansion language.

Conservative organizations are vowing to sue unless the Senate adopts similar measures, the WaPo reports:

Conservative legal activists and Christian leaders said Thursday that they will sue on behalf of military chaplains if the Senate does not pass a Republican version of the annual Pentagon policy bill that includes language barring Defense Department employees from participating in same-sex marriage ceremonies.

Austin Nimocks, senior counsel with the Alliance Defense Fund, said his conservative legal organization would sue all the way to the U.S. Supreme Court if necessary to ensure that federal law — instead of the Pentagon personnel policy — represents the group’s position.

“If the Senate does not follow the House and protect chaplains and service members, we have no doubt that legal action will be required,” Nimocks said Thursday at a news conference on Capitol Hill.

Said Alexander Nicholson, Executive Director of Servicemembers United and a former Army Interrogator who was discharged under DADT: “The passage of the defense authorization bill with these hostile amendments included comes as no surprise, and it should not become a cause for concern as long as our allies in the Senate and the President all stand strong and refuse to support a defense bill containing these amendments. These amendments were nothing short of a waste of time by lawmakers who were sent to Washington to do serious business and a waste of taxpayer money. The Pentagon, the President, and the American people have made it abundantly clear – we are moving forward and building a stronger military free of unnecessary discrimination.”

Said Servicemembers Legal Defense Network executive director Aubrey Sarvis in a statement: "The opposition may well believe they won the day in the House, simply outnumbering repeal advocates. But this fight is far from over. We must look to repeal supporters in the Senate, where the defense bill will be taken up next and where we are better positioned than in the House. We need to beat back this harmful language and make sure it does not survive in conference committee."