Morrissey attacks Queen Elizabeth and the Monarchy as she makes an historic visit to Ireland: 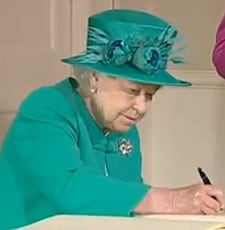 The full meaning of the Monarchy is, like the Queen herself, a complete mystery to most people. It is protected from any investigations by ridiculous stories of trivia and wedding dresses and on-again-off-again soap-drama romances. The most revealing statement came from Commander Christine Jones of the Metropolitan Police last month, when she warned that any British people carrying anti-royal placards who are "seen in the vicinity of the royal wedding would be removed under the Public Order Act." This means that any political dissent in England is silenced in order to protect the royals, which in itself goes against every principle of democracy.

The very existence of the Queen and her now enormous family – all supported by the British taxpayer whether the British taxpayer likes it or not – is entirely against any notion of democracy, and is against freedom of speech. For a broad historical view of what the Queen is and how she "rules", examine Gaddafi or Mubarak, and see if you can spot any difference.

You won't be able to.

"The last British monarch to visit Ireland prior to the Queen's historic visit this week was George V exactly 100 years ago," according to the Telegraph.

Watch a clip of the Queen's first visit to Ireland, AFTER THE JUMP…