A scheduled Tennessee Senate vote on the so-called "Don't Say Gay" bill which would forbid discussion of homosexuality in public schools was postponed by the bill's author Stacey Campfield, Metro Pulse reports: 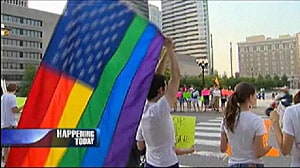 The full Senate was supposed to vote on the bill April 28, then May 5, then May 9, then yesterday, then today. Now, according to Tennesseean reporter Chas Sisk, Campfield pulled the bill from the floor today and reset it for a vote on next Wednesday's calendar. Sisk tweeted earlier today:

"Campfield says he's moving SB 49, the Don't Say Gay bill, to next Wednesday. They may not get to it that day either, then."

Metro Pulse speculates that Campfield may have gone too far in publicizing the bill, and its recent appearance on The Daily Show gave him pause. Or, the votes just weren't there.

…this late in the session, we won't be surprised if Campfield (or the Senate) ends up postponing any vote on "Don't Say Gay" until next year. We feel it is important to point out, however, that even if Stacey does get the bill through next week, it has virtually zero chance of making it to the governor's desk to be signed into law this year.

In any case, the bill was the subject of recent protests by the FCKH8 campaign and also a group of students who took their outrage to Tennessee's capitol.

Watch their protest, AFTER THE JUMP…