From a quite encouraging editorial by U.S. Ambassador to Jamaica Pamela Bridgewater, printed in yesterday's Jamaica Observer: 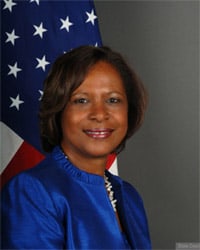 We have all read or heard of examples around the world where there has been violence perpetrated against individuals simply because of their sexual orientation.

This is, sadly, all too common. It is equally disheartening that those human rights activists defending the rights of gay, lesbian, bisexual and transgender people also face harassment and arrest. Also disturbing are journalists and artistes who incite hatred and violence through veiled writings and musical lyrics.

As a life-long Christian, I sometimes struggle with the religious beliefs which seem to be at odds with tolerance. Then I simply consider afresh the gospel of love, which convinces me that tolerance is in accordance with Christian faith and practice; it is at the core of Christianity. Tolerance does not ask us to abandon our faith or our values.

I understand well that every nation has its own moral standards and no nation should ignore its own moral compass. But there is also a universal moral standard that crosses all political borders. As we come into the fullness of our humanity, we must not allow hatred and violence to be what defines us. For me, it simply boils down to my belief in and hope that we all follow the advice of Matthew 7:12, and treat others as we would wish ourselves to be treated. That is why such action is called "golden".