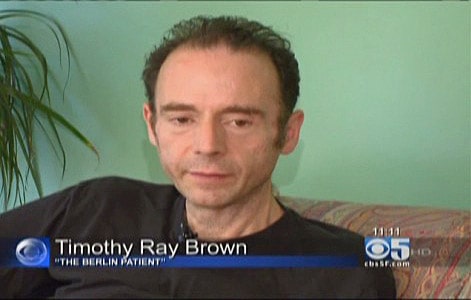 In December, I posted about Timothy Ray Brown who has been dubbed “The Berlin Patient” by the medical community, and is said to have been purged of HIV infection via genetically-engineered stem cells.

Veteran SF CBS reporter Hank Plante, who covered the early years of the AIDS epidemic, talks to Brown in his first television interview.

“I’m cured of HIV. I had HIV but I don’t anymore,” he said, using words that many in the scientific community are cautiously clinging to.

Scientists said Brown received stem cells from a donor who was immune to HIV. In fact, about one percent of Caucasians are immune to HIV. Some researchers think the immunity gene goes back to the Great Plague: people who survived the plague passed their immunity down and their heirs have it today.

Note: It could take a few seconds for the video to appear.

Previous Post: « News: Montenegro, Brian Brown, Space Shuttle, Elton John
Next Post: Robyn: ‘I Get Mistaken for a Lesbian all the Time’ »