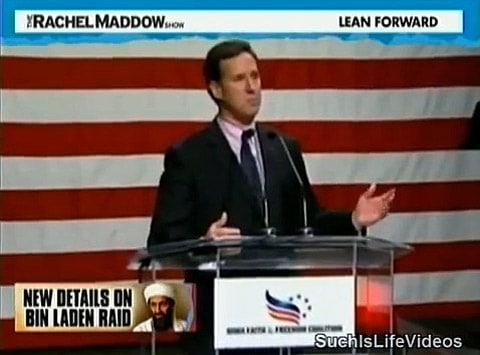 Rachel Maddow discusses Rick "frothy mix" Santorum's position on the completely debunked claim that torture led to Osama bin Laden's killing, and his insistence that tortured Vietnam vet John McCain's position against enhanced interrogation techniques is because he doesn't understand how they work.

“Everything I’ve read shows that we would not have gotten this information as to who this man was if it had not been gotten information from people who were subject to enhanced interrogation,” Santorum said, referring to the courier that led Americans to Osama bin Laden. “And so this idea that we didn’t ask that question while Khalid Sheikh Mohammed was being waterboarded, he doesn’t understand how enhanced interrogation works. I mean, you break somebody, and after they’re broken, they become cooperative.”

Watch Maddow take him apart, AFTER THE JUMP…