House Speaker John Boehner denied on Thursday that a contract with attorney Paul Clement regarding the House defense of the Defense of Marriage Act was executed illegally, the Washington Blade reports: 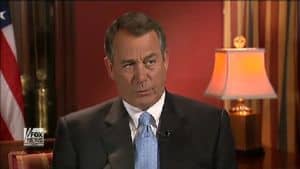 The contract was executed with Clement through his partnership with the law firm Bancroft LLC. Clement had earlier been contracted to defend DOMA in court through his employment at King & Spalding, but the firm dropped the agreement to defend DOMA, citing an inadequate vetting process prior to taking up defense of the statute. Clement resigned from his position at King & Spalding and went to Bancroft, where he pledged to continue litigating on behalf of the law.

But many lawmakers have questioned the source of the funds for hiring Clement because they weren’t appropriated before his contract was executed and the Bipartisan Legal Advisory Group has no budget to allocate funds for this purpose.

Rep. Mike Honda (D-CA) expressed concern in mid-May that Boehner's agreement could be in violation of the Antideficiency Act which prohibits "involving the government in any obligation to pay money before funds have been appropriated for that purpose."

Said Boehner: "This hiring was approved by the Bipartisan Legal Advisory Group. I’m confident that it complies with all of the rules of the House."