A group calling itself 'The Right Honorable Wicked Stepmothers’ Traveling, Drinking and Debating Society and Men’s Auxiliary' vandalized the HRC Store in Washington D.C.'s Dupont Circle on Tuesday night with pink paint, coating the windows and writing the word "Stonewall" across the front sidewalk, the Washington Blade reports. 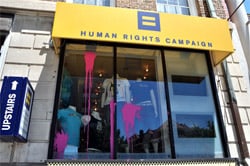 The group left a lengthy message on the website Pastebin.com outlining its reasons for doing so:

This week marks the 42nd anniversary of the Stonewall Riots…

…The modern LGBT movement owes its success to three days of smashing, burning, punching, and kicking–all of it happily indiscriminate–and the confrontational tactics of groups like ACT-UP that followed in the decades since. Yet, somehow we've forgotten our riotous roots.

The group also explained why it was targeting its own community:

Why, you're asking, did we specifically target the HRC, a massive national gay rights non-profit as opposed to vomiting urine on Rick Santorum or something equally fun?

Put simply, they suck. What do they suck? Cash. Lots of it.

The HRC rakes in something approaching 50 million dollars a year in revenue–their executive director, Joe Salmonellamayonaisemanese pulls in a salary of several hundred grand. What have we gotten out of this bloated carcass? Not a thing worth mentioning and every now and then, they eagerly sell trans people up the river. Seriously, this is an organization that hordes money and does nothing useful. It's a sad, sick dinosaur.

Everyone: We know you mean well, but stop giving these idiots your money. Stop putting that equal sticker on your car. Stop going to their lame galas. And for the love of Judy Garland's Ghost and Robert Mapplethorpe's Zombie Bones, stop saying "It Gets Better" and hoping for a miracle from up on high. We don't expect you to riot (although we swear you'll love it once you get going!) but it's time for us to quit with the passivity, move to action, build community and care for each other instead of hoping the Gay Non-Profit Industrial Complex will ever get anything done.

Said HRC's Michael Cole to the Blade: "It’s unfortunate that after a marriage win in New York that represented an unprecedented coming together of LGBT groups, some are more interested in fostering division in the community."

Previous Post: « Charlize Theron Speaks Out for Same-Sex Marriage, Won’t Marry Till Gay People Can: VIDEO
Next Post: Dan Savage to Tony Perkins: If Homosexuality is a Choice, Choose Me — VIDEO »