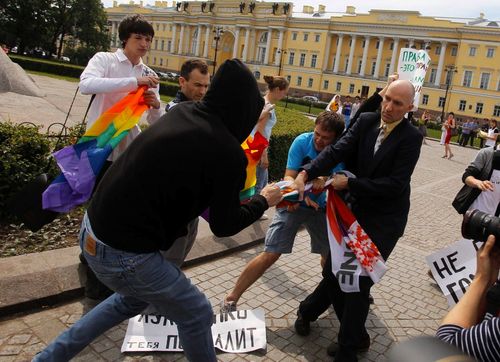 Gay rights participants who were taking part in an unapproved pride parade in Saint Petersburg, Russia today were attacked by a group of anti-gay protesters. 14 LGBT activists were arrested as were some of the anti0gay attackers. Russia's most highly visible gay rights advocate Nikolai Alekseyev was one of the jailed but was released soon after. 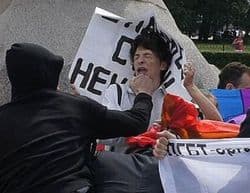 "I've seen a lot of things in six years of holding such events in Moscow, but I've never seen such cynicism in St. Petersburg," said Nikolai Alekseyev, Russia's highest profile gay rights activist, who was himself briefly detained.

UK Gay News has lots of detailed information on the attacks. The photo to the right captures the moment right gay activist Alexander Sheremete was attacked by an hateful anti-gay protester. Sheremete reportedly suffered head and lips bruises.