This sounds like it could indeed be an awful hate crime. The tires of the 30 floats were slashed overnight just before today's Pride parade in Chicago. According to the Windy City Times: 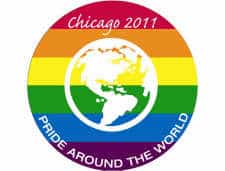 Chuck Huser, owner of long-time Pride float provider Associated Attractions at 4834 S. Halsted on Chicago's South Side, said the floats were fine when he left 8 p.m. Saturday night, but when he returned 5 a.m. Sunday to start preparation for drivers to depart, he found two tires punctured each on more than 30 floats.

"This is catastrophic," he told Windy City Times at 8 a.m. June 26. "This has never happened before, and we have been doing this since 1989."

The attackers broken in but did no other damage to the floats, and they took nothing else, leaving Huser to believe this had to be a hate crime. No notes were left.

Huser has filed a police report, but his main focus the morning of the Pride Parade was finding an open tire shop, where they were running back and forth to repair the tires.

"They didn't want these folks to go out," Huser said. He added that he has no disgruntled employees or customers, and that most of his workers have been with him more than 20 years.

Openly gay Illinois state Representative Kelly Cassidy on if this might be a hate crime: “It’s hard not to think so a couple of days after New York’s huge victory."

Twenty other floats, all stored indoors at a separate location, were not damaged and will participate in today's Pride parade in Chicago. Huser and his team are currently scrambling to find replacement tires for the vandalized floats before the parade begins at noon today. I hope it works out.