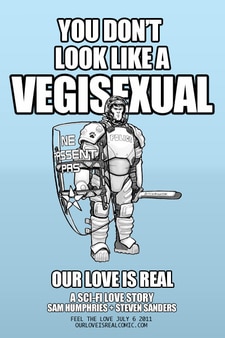 Comic book writer Sam Humphries, known for his work on the CBGB comic book, and illustrator Steven Sanders, who has worked on Uncanny X-Men, recently teamed up for what critics are calling a "splendidly perverse" sci-fi one-shot, Our Love Is Real.

Here's a summation of this limited edition funny book:

FIVE YEARS AFTER THE AIDS VACCINE… Plantsexuals riot in the streets for equal rights. Humans fall in love with dogs. And crystals are more than just jewelry.

A chance encounter on the job changes a riot cop’s life forever as he finds himself caught in a bizarre love triangle that blurs romance, crime, and lust beyond recognition.

While social conservatives will no doubt have a kanipshin conniption over the book, fan boys and girls are already clamoring for Our Love Is Real.

If you're among them, you had better act fast: Humphries and Sanders are only printing 300 copies, which are being sold at select stores across the nation. There will, however, also be a digital edition.

I've included the complete list of stores that are carrying Our Love Is Real, AFTER THE JUMP…