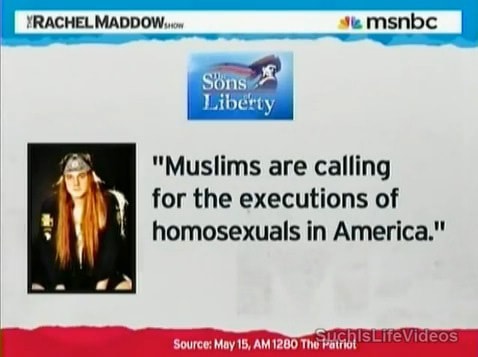 Bradlee Dean, a Christian Metal Rocker who runs You Can Run But You Cannot Hide Ministry, has announced that he is suing Rachel Maddow for $50 million (however, "money is not the issue" according to a press release from his attorney) for false accusations and defamation over remarks about homosexuals and Sharia Law which he says were misrepresented by Maddow. 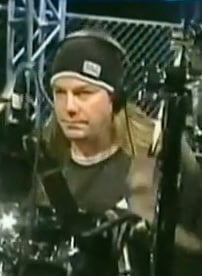 You may recall the segment in which Maddow aired the bit about Dean – it was about then candidate for Governor Tom Emmer and the Target boycott, and Emmer's donations to Dean's ministry.

Watch the segment of Maddow's show in which she discusses Dean (it starts at about 1:39), and Dean's response to the segment, AFTER THE JUMP…

In the course of his ministry, Dean once made a statement on radio criticizing his fellow Christians for not taking a stronger stand about the gay rights lobby promoting homosexuality in the schools. He made a strong reference to Muslims taking the issue more seriously in the context of Shariah law, but did not condone their practices. It was Bradlee's intent to focus attention on the issue, not to advocate harm to anyone.

Despite the very clear disclaimer by Bradlee Dean on his ministries website and elsewhere regarding the false accusation that he was calling for the execution of homosexuals, MSNBC's Rachel Maddow and others seized on and accused Dean on her show of supporting the killing of homosexuals, as is the practice in some radical Islamic countries. This seriously has harmed Dean and the ministry, who pride themselves on respect and love for all people. 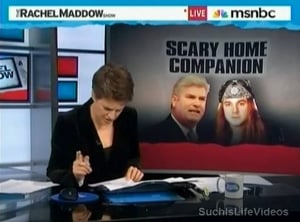 Maddow actually did read Dean's disclaimer on the air following her segment. Watch it, AFTER THE JUMP…

The other part of the press release explains that Dean is taking this action because he is a Michele Bachmann ally and Maddow and the left wing are out to bring her down:

In an interview earlier this year, MSNBC's president Phil Griffin admitted that the network, to boost its ratings, caters to the so-called "progressive left". This explains the malicious attacks on Bradlee Dean and his ministry, which are being used to harm the presidential campaign of Congresswoman Michele Bachmann, who is a conservative Christian.

In the past, Dean and his ministry have been complemented by presidential candidate Michele Bachmann (who prayed for the ministry) for their work in promoting values for the nation's youth. The left wing media's effort to defame Dean is an obvious way to try to harm Bachmann's presidential prospects, who they fear and despise. Other left wing media outlets have followed MSNBC and Maddow in their slanderous efforts. This suit may just be the first in a series of cases meant to protect the fine reputation of Dean and his ministry.

Finally, the press release says: "The lawsuit is filed by attorney Larry Klayman, the founder of Judicial Watch and Freedom Watch, in DC Superior Court and seeks in excess of $50 million in damages. However, money is not the issue. 'This case is filed as a matter of principle,' stated Klayman. 'We need more Bradlee Deans in the world and hateful left wing television commentators must be made to respect not only his mission but the law,' he added.

Dean and his attorney are holding a press conference tomorrow at 11 am in NYC, where they will speak.

Watch the segment of Maddow's show in which she discusses Dean (it starts at about 1:39), AFTER THE JUMP…

(thanks to Dave Evans for the clips!)

Dean's response to Maddow's segment, from back in October:

Previous Post: « A Gay NY Couple Talks About How Marriage Equality Will Affect Their Child: VIDEO
Next Post: Kellan Lutz Shows Off His Torso, Fashion Skills »