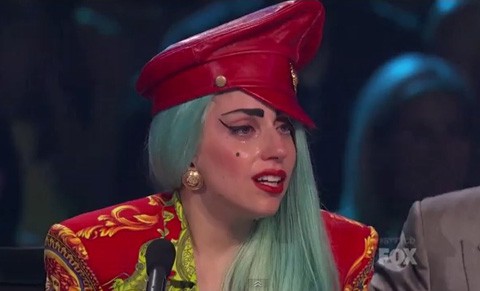 Lady Gaga was a guest judge on last night's So You Think You Can Dance, showing up in what appeared to be a vintage Versace suit (and an eyeliner flare that could have been seen as a tribute to the late Amy Winehouse).

She was particularly pleased with performances by Marko Germar and Melanie Moore, which caused her to break down in tears, and throw her shoe at the stage, respectively.

The poignant moment came when Gaga broke down in tears following Marko Germar’s routine. “I’m just so proud of you,” she said. “There were so, so many things that I did wrong when I was younger and so many things that I wish I could take back, and I felt every moment of that through your dance tonight.”

But it was the final performance by Sasha and Melanie that impressed Gaga the most. She loved it so much she threw one of her 12-inch boots at the stage. “In the dance community, when you do a really good job, you throw your shoe at the stage.” she explained and added, “Everyone can pack up and go home, because that was the performance of the evening.”