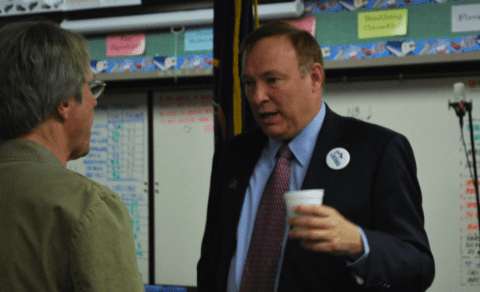 Jim Dabakis became the first openly gay man to win the Utah Democratic Party’s chairmanship this weekend. And now that he’s won, Dabakis vows to keep strengthening frayed ties between his party and the Mormon Church.

According to The Salt Lake Tribune, Dabakis previously worked with the church to build support for Salt Lake City’s 2009 anti-discrimination ordinance and more recently held a private meeting with about 30 powerful Mormon locals to bridge political divides.

…Dabakis is optimistic that the Democratic Party has a message that can resonate with the LDS faithful. “On 90 percent of the issues, we’re on common ground, he said, adding that sometimes Democrats inadvertently sent messages that were antithetical to Mormon sensibilities.”

Dabakis has also been coordinating with State Senator Scott Howell, a Mormon Democrat who says he was “appalled at how the right wing has hijacked my faith in this state.” Hopefully he and Dabakis can start steering the church at large, so invested in passing California’s Proposition 8, toward to light of LGBT rights.