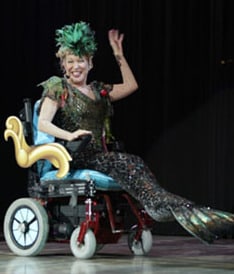 Lady Gaga caused some controversy during a concert in Sydney last week, when she rolled onto stage as a mermaid in a wheelchair.

Differently-abled activists were upset by Gaga's antics, and some demanded an apology, and may have been behind Gaga nearly getting egged while coming out of a gay bar this weekend.

Singer Bette Midler, however, has a different bone to pick: she took to Twitter to remind Gaga that she originated the Mermaid wheelchair bit over three decades ago.

She also remarked, "I've been doing singing mermaid in a wheelchair since 1980-You can keep the meat dress and the firecracker tits – mermaid's mine."

Midler forgot to mention that Kurt Cobain also used a wheelchair during a 1992 performance.