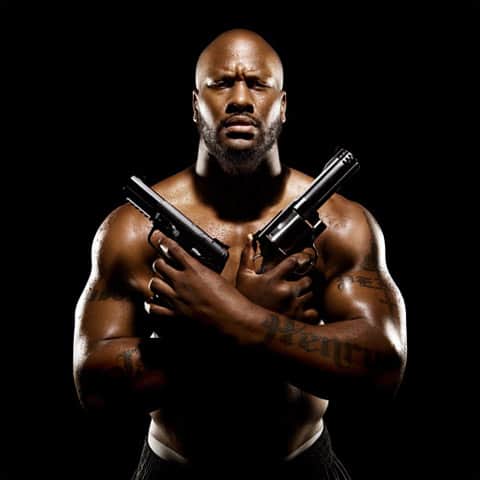 As I mentioned yesterday, a new Men's Journal feature on Pittsburgh Steeler linebacker James Harrison has been making headlines because of many things Harrison says in it. Chiefly among them is an anti-gay slur directed at NFL Commissioner Roger Goodell. (photo from Men's Journal)

Here's the paragraph in which the slur against Goodell appears:

He goes on in cold fury, spitting curses and charges, none of which will earn him sympathy from the “devil” or endorsements for Double Stuf Oreos. “Faggot Goodell” (also described as a “punk” and “dictator” by Harrison), Anderson (“another dummy who never played a down”), and Hanks, a former Pro Bowl safety with the Niners (“he needs to be ashamed because he played D before, though he never was what you’d call a real hitter”), conspired, he says, to target the Steelers, who have “too much force, too much swag, and are predominantly black.” Says Harrison: “We sent them a tape of 27 hits from games that following week — 27 hits like mine or worse — but none of ’em got flagged or fined. And what’d they say to us? Nothing, not a peep. So I guess they ain’t fouls unless we do ’em.”

Last night, Harrison posted to his Facebook an entry he says "will be his only response to the Men's Journal article. In it, he says, "I also need to make clear that the comment about Roger Goodell was not intended to be derogatory against gay people in any way. It was careless use of a slang word and I apologize to all who were offended by the remark. I am not a homophobic bigot, and I would never advocate intolerance of gay people."

Harrison's full statement, AFTER THE JUMP…

I’ll start by offering my apologies for some of the words that I said during the four days in May that Men’s Journal was invited to my house to discuss what the NFL has recently been portraying as their attempts at ‘player safety’ rules and regulations, and to cover my everyday workout routine.

I did make comments about my teammates when I was talking about the emotional Super Bowl loss, but the handful of words that were used and heavily publicized yesterday were pulled out of a long conversation and the context was lost. Obviously, I would never say that it was all Ben’s or Rashard’s fault that we lost the Super Bowl. That would be ridiculous. Both Ben and Rashard are great players and great teammates. Clearly the entire team bears responsibility for the loss, me included. It was a team effort and a team loss. My teammates know me well, and hopefully understand the things I said were not meant to accuse them of the loss. We all have discussed several things that went wrong in the Super Bowl since that day. What I do apologize for and take full responsibility for is for speaking in such a candid manner to someone outside the team.

I also need to make clear that the comment about Roger Goodell was not intended to be derogatory against gay people in any way. It was careless use of a slang word and I apologize to all who were offended by the remark. I am not a homophobic bigot, and I would never advocate intolerance of gay people.

As far as the photo that was shown on air yesterday, collecting guns is a hobby of mine, and I advocate the responsible use of firearms. I believe in the right to bear arms. I like to go to the shooting range. I like to hunt. I like to fish. I could just as easily have posed with my fishing poles but it obviously wouldn’t be an interesting picture for the magazine. I am not promoting gun violence by posing for that photo. There are also other photos in the magazine story that were not shown on air yesterday – including me with my sons, with my mom and as a kid.

Unfortunately, the above items and other comments have detracted from the original purpose of the story – a position I have been advocating for some time now. If player safety is the NFL’s main concern, as they say it is, they are not going about it in an effective manner. There’s nothing about extending the season or issuing exorbitant fines on defensive players that makes any shift toward the prevention of injury to players.

I believe that the league may have been feeling increasing pressure about injuries and concussions last year, and that they panicked and put rules in place that weren’t fully thought out. I’m not advocating more flags and fines, I’m just saying that the current rules are not completely fair, and I don’t believe in the way that the league is handling their position as overseer of the NFL and the well-being of its players.

As far as the character and reputation hits I may suffer as a result of my comments in the article, I’ll take those hits and more if it brings increased attention to the re-examination and installation of rules and regulations that would create a REAL impact on player safety.

Somehow I doubt this is the last we'll be hearing from him on this topic.