YOUR FEATURE PRESENTATION
The ads have been promising "It All Ends" for months now. And it does. But how about beginnings?  The film wing of the Potter franchise began eleven long years ago with Harry Potter and the Sorceror's Stone (2001) and its been amassing pop-culture power ever since, as steadily and frightfully as Lord Voldemort has been conquering Hogwarts and the Ministry of Magic. There's a certain level of endearment or at least respect that comes with cultural staying power of any sort and it now feels curmudgeonly to say an ill word. Whether you've seen just a few or all of the Potter pictures or none and regardless of how much you enjoyed them, you'll feel this era passing. Deathly Hallows Part Two capitalizes on this and is currently wringing many tears of goodbye from its fervent fanbase.

Though non fans (like myself I really admit) could use a "previously on Harry Potter…" intro, Harry Potter and the Deathly Hallows Part Two begins with a bolt, a rather imposing vertical one from Voldemort's wand. That violent jolt of an opening is more than welcome after last year's Part One a con-job snoozefest (the series nadir) wherein Harry, Hermione and Ron basically sat in a tent and argued whilst Warner Bros made another billion merely by avoiding the inevitable: This Ending Right Here. 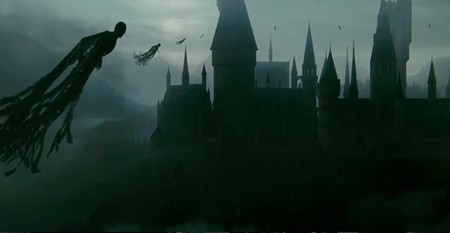 After You-Know-Who's intro, what follows are a series of superbly static colorless shots of Severus Snape (Alan Rickman) and Hogwarts eerily surrounded by floating Dementors. It's a neat wordless opening, reminding us how dire things are…

Color returns to the imagery when we rejoin Potter and friends but the palette is funereal and not just because they're graveside; the entire franchise now feels weighted down by its immense size (8 films, 19 hours and 38 minutes, the zeitgeist, billions upon billions earned), just as Potter himself carries the weight of the world on his shoulders. You know the plot by now: The Boy Who Lived must find and destroy Voldemort's seven Horcruxes (pieces of his soul) to defeat him for good. If you haven't read the books, you'll be as horrified as Harry to discover where one of the last pieces is hiding.

With the boringly repetitive find-destroy (repeat 7 times) structure of the last two pictures mostly out of the way, Harry Potter 8 manages to be the quickest of all of the Potter pictures, clocking in at a little over two hours instead of pushing past two and half. Not that it's always fast. The franchise still loves its lengthy expository reveals and Alan Rickman's fan-beloved embodiment of Severus Snape still has a voice that's amusingly trapped in molasses. In fact, in one key sequence Rickman stretches a threat to the student body to nearly comical lengths with pauses between each and every word. Sometimes he stops between syllables!

Apart from Potter, Rickman's Snape is this film's key character, and his sad fate is well handled by Director David Yates who was entrusted with the last half of the franchise (this is his fourth consecutive Potter picture). Yates's preferred rhythms are not unlike Rickman's line readings; he favors the theatrically elongated. While his leisurely style undersells the potentially funny bits (I weep for what could have been in the Helena Bonham Carter pretending to be Hermione pretending to be Bellatrix sequence) it proves just the right style, otherwise, for a final chapter. There's plentiful time to enjoy the impressive visuals and production design, the best of which are found in Minerva's (Maggie Smith) preparations for battle including a glowing milky bubble that seems to flow over Hogwarts and is then mirrored rather subtlely in the Dark Lord's teeming black-clad hordes who are themselves flowing over the lands surrounding the school. 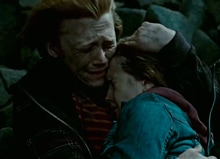 The slow beats between dramatic punches also give you plentiful time to say your silent goodbyes as the parade of familiar wizards pass by for the final time. Each of them are given at least one snappy heroic bit to perform as their curtain call, Neville Longbottom especially.

It sometimes feels like the divide between Potterheads and those who are much less enamored of the movies is as wide as the gap between Houses Gryffindor and Slytherin. But let's not make the same mistake as the Potter franchise and dismiss whole swaths of people like that snap-judging Sorting Hat. For whether you are Potterhead, an occasional fan, largely indifferent or even dismissive of the series, you will feel this era passing. It's been a behemoth but it does actually end here.