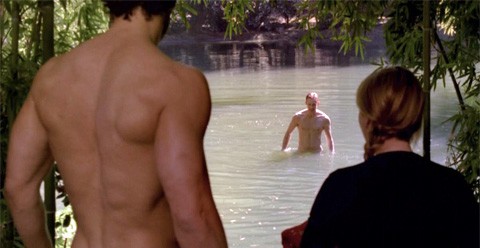 True Blood's Joe Manganiello and Alexander Skarsgard faced off sans clothes on last night's True Blood episode. Manganiello tells MTV that it's less interesting to be nude on the set with Skarsgard than it is to be with a live wolf. 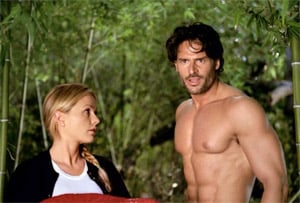 Says Manganiello: "The showdown between Alcide and Eric takes place in the lake. Eric has drunk some fairy blood so he can be in the sunlight. Sookie has to enlist Alcide's help to go track him down so he has to transform into a wolf and go sniff him out. Basically it's Alcide and Eric both naked, screaming at each other at the top of their lungs with Sookie in the middle…Anytime the wolves come out it's always a little wild. Alex and I were both naked, him in the water, me not, yelling. There's a wolf near us, Anna's in the middle….Alex is a really funny guy, so is Anna…[We're] as comfortable as we can be, seeing how we're naked with a giant body of water and a wild animal."

Watch Manganiello discuss the scene, AFTER THE JUMP…