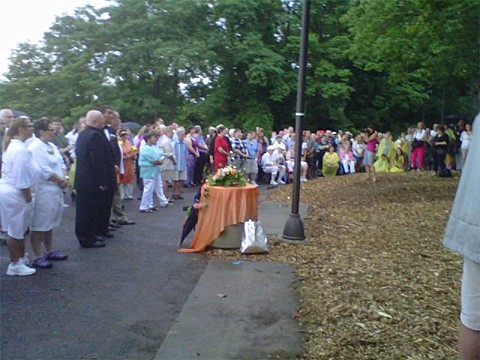 A mass wedding took place this morning in Niagara Falls. 46 gay and lesbian couples wed on the second day of marriage equality in New York, using the tourist attraction as a background, the AP reports:

The newlyweds wore matching tuxedoes and suits for the 30-minute ceremony, which opened with a playing of Ray Charles singing "Somewhere Over the Rainbow."

The group wedding came as hundreds of same-sex couple across the state began getting married Sunday, the first day New York allowed them.

"Everything we've felt and lived in our lives, it's legal," Candy Casey, of Buffalo, said Monday after marrying her partner of 21 years, Diane Wnek. "To be able to say to the rest of the world, 'Yes we count, we're legal.'"

Watch a WGRZ report on the mass wedding from earlier this morning, AFTER THE JUMP…