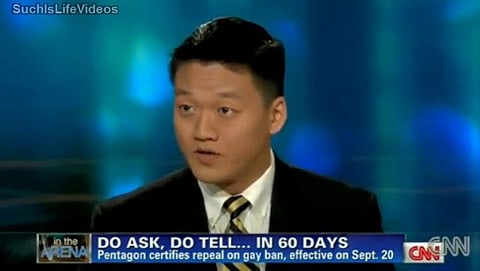 Lt. Dan Choi made an appearance on CNN's In the Arena on Friday to discuss the repeal of "Don't Ask, Don't Tell" and aired his unhappiness with Obama's process in repealing the measure, going so far as to say he'd look for a Republican to support in the next election.

"Why should I endorse President Obama? Listen, I'm not vindictive. I'm not vengeful. If I was vindictive, then I would say, President Obama if you want my endorsement, then I'll just have a study about that. We'll have a comprehensive review working group. And then we'll get you fired. And then we'll start to talk to other people and I'll have a platform for everybody else to hate on you."

In related news, the Obama administration is still trying to get Choi to pay for his own 'DADT' discharge.