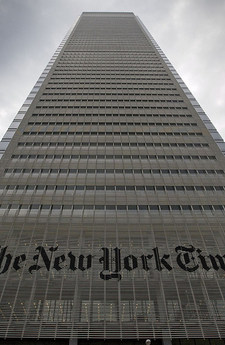 In one piece, called "Unfinished Business: 'Don't Ask, Don't Tell,'" the paper takes on the military's ongoing Don't Ask, Don't Tell discharges, writing that the armed services and its leaders are still not doing enough to normalize gay inclusion in their ranks.

"Prejudice and harassment apparently led at least one airman to announce that he was gay and request a discharge from the military under “don’t ask, don’t tell," they write.

"The discharge was approved in late April. Three others in the Air Force have also requested and received similar discharges in recent weeks."

The board goes on:

Time has run out on the use of 'don’t ask, don’t tell' for these kinds of discharges. One of the points of repeal is to begin to build a military culture in which no one feels the need to request a discharge because of intolerance. That may take time, but the best way to start is for [new Secretary of Defense Leon] Panetta and other military leaders to wipe official discrimination from the books in the next few weeks.

Meanwhile, elsewhere in the Gray Lady, another piece, called "Unfinished Business: The Defense of Marriage Act," blasts the 15-year old law that they describe as one of "the most overtly discriminatory laws in the nation’s history."

The paper's editorial board also lambast the current Congress for its inaction, writing, "Any Congress with a real respect for personal freedom would repeal it. That, of course, does not describe the current Congress, where many members talk a great deal about freedom but apply it mainly to businesses and gun owners."

Since lawmakers aren't taking the initiative, the paper says, "the best hope for ending this legalized bigotry is with the courts."

While the Times certainly qualifies as one of the more liberal papers in the nation, it's always nice to see editorial boards, speaking the truth against disgraceful discrimination.