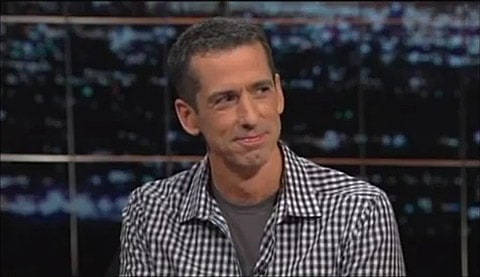 Some conservatives are not happy with columnist Dan Savage over remarks about Republicans and Rick Santorum he made on his Friday night appearance on Real Time with Bill Maher. Santorum has been angry at Savage for years over the Spreading Santorum website he created over the then Pennsylvania Senator's remarks comparing same-sex marriage to man-on-dog sex.

Dan Savage apologized for the remarks shortly after his appearance.

I was on Real Time with Bill Maher tonight. I was talking to someone at the party after the show, and they asked me how I thought it went. Okay, I said—and then I told them that I said something really, really stupid, half under my breath, and I was relieved that Bill and the rest of the panel didn't hear it. But folks watching the show at home might have heard it… so… I want to apologize for… um… wishing all Republicans dead.

It was a stupid, rude, thoughtless remark. I regret it and I retract it and I apologize to anyone watching at home—particularly my father (!)—who may have heard me say it. I had a drink before the show—first and last time I've ever done that—but this wasn't a case of, "In vino, veritas."

This was a case of, "In vino, stupidtas."

Santorum seized on the Maher appearance to try to discredit Savage:

"It’s filth. It’s, you know, this man has, has gone out there and tried to destroy my integrity. I mean, you’ve heard the whole issue of the Google issue. That’s Dan Savage. You know, it’s, it’s the lowest, you know, debasement of public discourse. It’s, it’s offensive beyond, you know, anything that any public figure or anybody in America should tolerate, and the mainstream media laughs about it. They, they, they kid about it. They write about it. They say, “Oh, Santorum’s got a Google problem.”

As you may recall, Santorum has compared same-sex marriage to sex with dogs, has said that it's "common sense" to keep gays from marrying and adopting children, wants to reinstate the ban on gays in the military, and has said that gays shouldn't have the "privilege of government benefits" offered to heterosexual couples, yet Santorum claims he's not a homophobe.

Watch part of Savage's Maher appearance and Santorum's reaction, AFTER THE JUMP…