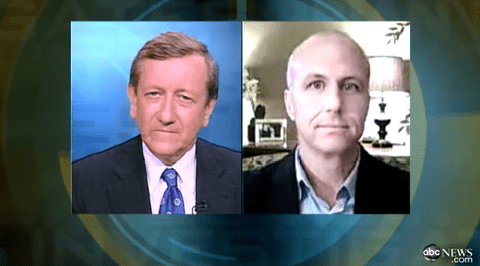 For every cloud, the popular saying goes, there is a silver lining. And that’s no less true than in the case of Michele Bachmann’s husband, Marcus, and his “ex-gay” clinic.

In the interest of keeping his coverage fair and balanced, Ross also interviewed Alan Chambers, leader of the “ex-gay” group Exodus International. And, according to Chambers, he and his peers are just like Weight Watchers.

Asked whether Christian therapy can indeed help people overcome same-sex desires, Chambers insists, “We can look at other organizations who help people dealing with other life struggles. For instance, Weight Watchers… Should we go after Weight Watchers and tell them ‘Don’t say that there’s anything beyond obesity’ for people who are struggling with obesity and want an alternative to that?”

While Chambers’ remarks is completely off-the-wall, and definitely worth a view, he also said something even more compelling: that when he was a child struggling with his same-sex desires, he thought,”I didn’t choose” to be gay and “didn’t want” to be gay.

In Chambers’ view, then, he was born gay, but it didn’t fit into his “life plan,” an assertion that implicitly contradicts ex-gay and right wing claims that people “choose” to be gay.

Watch Ross’ report, AFTER THE JUMP…