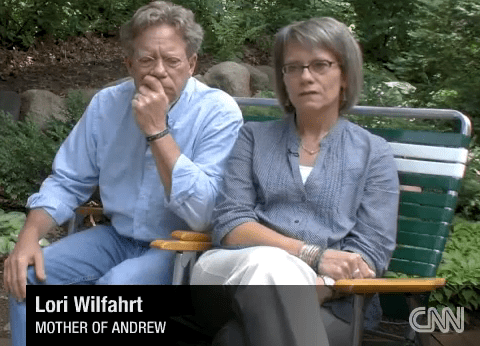 Lori and Jeff Wilfahrt, parents of Andrew Wilfahrt, a gay Army Corporal killed in Afghanistan earlier this year, continue honoring their son’s memory in the best way possible: fighting for LGBT equality, especially in Minnesota, a state that may vote to ban gay marriage in 2012.

“I hope my son didn’t die for human beings, for Americans, for Minnesotans who would deny him civil rights,” Mr. Wilfahrt recently said in a speech about Andrew.

Watch as the Wilfahrts discuss their son’s life, including being accepted as openly gay in the army, and explain why they’re playing the “trump card” to get straight people on board with pro-gay policies.

It’s a moving video and may be a bit of a bummer for a pre-holiday evening, but it’s also incredibly inspirational and reminds us of how much the armed services and their families sacrifice for this country.