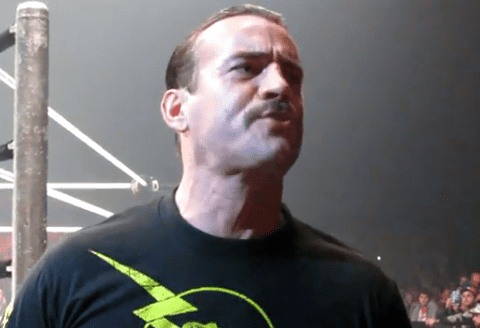 WWE wrestler CM Punk unleashed a stream of invectives during a verbal altercation with a fan at an event in Australia yesterday.

In addition to referring to the fan as “sally” and calling him a woman, Punk also called the fan “a homo.” Clearly he’s very mature.

WWE was quick to respond to Punk’s remarks, which appeared on TMZ, and released a statement insisting, “The WWE does not condone this type of language or bias and we reinforce that with our talent who are independent contractors.”

Punk has also offered his contrition, via Twitter: “I’m glad TMZ posted that video because everybody needs to be held accountable for their [B.S.], me included. What I said was [B.S.]. I’m embarrassed. I own up to being a total douche in this situation and I offer a sincere apology to anybody I hurt with careless words.”

Watch the altercation, AFTER THE JUMP…