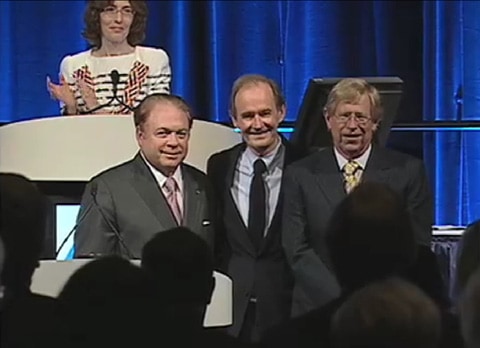 In accepting the honor, David Boies reflected on his role in Perry v Schwarzenegger and noted, “What we’ve been able to accomplish is based on the contributions of so many other people who made those contributions under much more difficult circumstances” and accepted the award on behalf of them.

AFER, Boies and Olson will be back in court on September 6 for oral arguments in front of the California Supreme Court on the question of whether under California law official proponents of a ballot initiative have an interest in defending the initiative when it is challenged in court.  The U.S. Court of Appeals for the Ninth Circuit deemed the question essential to its determination as to whether the official proponents of Proposition 8 have standing to appeal Judge Vaughn R. Walker’s ruling from last summer.

Watch Boies and Olson accept the award, AFTER THE JUMP…

Previous Post: « Everything is Big on the Sperm Whale: VIDEO
Next Post: Police Attacked in London as Riots Spread: VIDEOS »