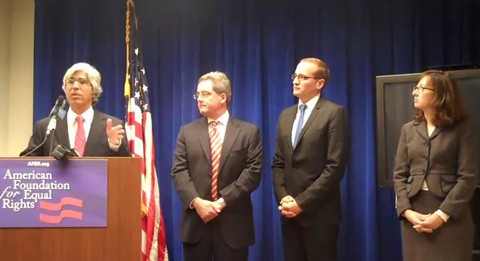 Following a hearing on whether videotapes of the trial challenging Proposition 8 should be made public, Chief U.S. District Court Judge James Ware said that he “won’t delay very long” in issuing a ruling, the San Diego Gay and Lesbian News reports:

David Thompson, an attorney for the Prop 8 supporters, contended that the release of the videotape would put their two star witnesses in harm’s way because their faces and voices would become publicly known. AFER attorneys argued that because the two witnesses are already publicly known because they have frequently testified for anti-gay groups in trials. Furthermore, the AFER attorneys noted that the two witnesses have not been “intimidated” in any way since the Prop 8 trial last year.

Prop 8 Trial Tracker has an archived liveblog of the proceedings.

Ware said he would issue a written opinion on whether to remove a seal on the video of the same-sex marriage trial that ended in a ruling declaring the marriage ban unconstitutional. Ware did not say how he was leaning. But he said "the integrity of the judicial process is affected" when one judge promises a videotape will be used only for limited purposes and a second judge later decides to make the video public. The judge also said, however, that there is keen public interest in the proceedings and that the tapes might 'heighten public knowledge' about the case.

Watch AFER's presser following the hearing, AFTER THE JUMP…