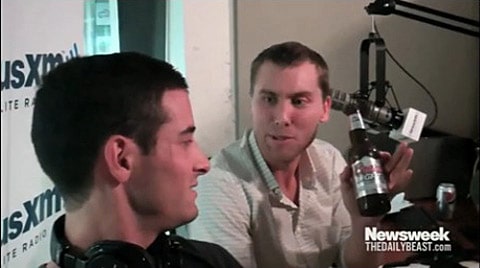 Lance Bass and his new Sirius XM radio show The Pop Ten are featuring in a profile at The Daily Beast by Ramin ('gay actors can't play straight') Setoodeh, though there is none of that controversy here — just a reintroduction to Bass in his new role as music countdown host and a revisit of his romantic life:

“I’m a serial dater,” he says. “When I see someone I like, we go on multiple dates. In my older age, I’ve learned to take things slower, because I used to be that total-fall-in-love-after-a-day guy. I’ve learned, you can have those feelings, but you don’t have to show that. Then you don’t have to worry about them saying, ‘He was my boyfriend.’”

Still, he’s on the verge of his first serious relationship in a while. “I don’t want to have so many exes. I haven’t had a boyfriend in four years. But now it’s getting there,” he says of a guy he’s been seeing for a few months in Los Angeles. “I’m such a relationship guy. I really am.”

He has also ditched his trademark 'do:

“For the first year of ‘N Sync, my hair was just a bad comb-over and really greasy,” he remembers. A stylist in Germany suggested spiked hair, which became his calling-card look for the last 10 years. But now, in an effort to look more mature—and because his hairdresser recommended a “summer cut”—he announces, almost wistfully, “The spikes are done.” Another chapter ends for Lance Bass, but he’s not ready to sing “Bye Bye Bye.”

Watch a bit of behind-the-scenes drinking on his radio show, AFTER THE JUMP…